We have a network drop in the space and our first computer was put together by Rob and Tom with the intent to build a CNC controller and microcontroller programmer out of it. It took some time to put together all the parts and pick out the best RAM from the various machines that were salvaged, but it all worked upon first boot.

The initial install of Ubuntu had to be aborted due to lack of time to get an 866Mhz processor to boot up from an old CD-Rom and the format a 60Gb HD. Tom opted to simply take it home so he could do the install before the next meeting. 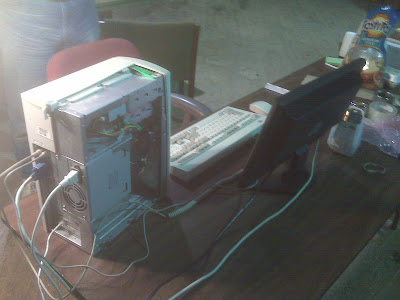 I like to learn. When I first heard the term "skill collector" it really resonated with me. I want to know how to do as many things as I can and I learn by putting my hands to a task. There is little more thrilling than working hard at something for a long time and seeing it finally come together, knowing you've mastered that little bit of knowledge. For me, MakeLV is about having more experiences like that with other people.
View all posts by Josiah

We're a community of makers, hackers and creatives in Allentown, Bethlehem and the rest of the Lehigh Valley who are convinced that we can do even cooler things by interacting with other people who are doing cool things.

Interested in becoming a member? Please see our membership information.

Does MakeLV excite you? Donate to help us build a better equipped community of makers.